Solar power must be “mainstay” for new Building Regulations 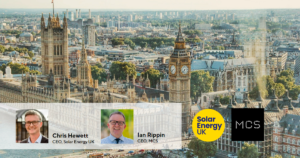 Our CEO, Ian Rippin describes having photovoltaic panels on home rooftops “as a mainstay of the Future Homes Standard is critical” for meeting the law’s goal of cutting emissions by 80% compared to homes built under the old regulations.

“The problem now is that it’s in pockets, depending on local building regulations,” Ian tells MPs [1].

Chris Hewett, Chief Executive of the trade association Solar Energy UK was alongside him and said that expectations were that “pretty much every English home” built from 2025 will have some solar generation capacity.

Quizzed on the Government target to have 70GW of solar power capacity in place by 2035, up from an estimated 15.5GW today, Hewett replied that the goal is “definitely enough… and it’s feasible”, as solar power is comparably cheap to exploiting onshore wind and is the fastest to deploy.

The projected increase in electricity generation to 10% of the country’s demand, up from the current 4%, is expected to meet the growing power needs resulting from the increasing electrification of heating and transportation.

As is the case today, expectations are that about two-thirds of capacity in 2035 will be in solar farms, with the rest split between residential and commercial sectors. But Hewett added that there is “definitely going to be some floating solar” in the UK by then, the technology having been implemented elsewhere in the world many years ago. Furthermore, it is “absolutely certain that there is going to be a lot more solar post-2035,” he told the MPs.

Anna McMorrin MP told the panel that written evidence submitted to the committee stated that obtaining timely connections to the grid “is one of the biggest barriers” to expanding solar power, with waiting times extending well into the 2030s. [2] She described the national grid as a “pretty broken system”.

Hewett said that grid access was rising up the political agenda – and not just for solar, as the rise of renewables means that “we now have a completely different power sector”.

Professor Alastair Buckley, Professor of Organic Electronics at the University of Sheffield, suggested that it might make sense to have regional targets for grid connections, to incentivise distribution network operators.

Committee chair Philip Dunne MP later suggested that grid access could be the subject of its own dedicated inquiry.

Discussing the windfall tax on the energy sector, Hewett described it as “a mistake”. For the solar sector, there is no allowance to offset it through investment, despite the dire need to wean the country off dependence on natural gas. He said it produced an “unlevel playing field”.

Caroline Lucas MP raised the Smart Export Guarantee, which pays consumers for excess solar power fed into the grid, and whether it is high enough to incentivise growth.

“I don’t think it’s sufficient. I do think it’s been taken over by the economics” of cheaper solar, said Ian, meaning that self-consumption makes sense rather than selling the electricity generated. “We are going to need something else” to reach 70GW, he added, as “There is a problem of fairness.”

Hewett added that access to cheap capital is needed to help expand the residential sector, as already seen in Scotland, where 0% loans for solar systems, insulation and heat pumps are available. [3]

Lucas also raised the issue of VAT applied on home battery storage systems, which are VAT free if installed alongside a solar system but not if retrofitted afterwards. Case described it as a “perverse” situation.

Ian Levy MP, who has a solar manufacturing company within his constituency of Blyth Valley, asked what skills gaps needed to be filled – a sensitive issue for the solar sector, which is working with the Mayor of London on the Solar Skills London programme. [4]

Hewett said while demand for solar power presented an “absolutely massive opportunity” for new jobs, there was a severe need for skilled people, not least those qualified to work on high-voltage systems, to help rectify persistent grid access challenges.

Ian Rippin said that all electricians should know how to install solar systems and, “From a levelling up point of view, a solar installer in London and one in Liverpool earn about the same,” while both doing their bit for climate change.

From an R&D perspective, there is no skills gap, said Case. “But before you address the skills gap, address the manufacturing gap”, as manufacturing within the UK is minimal. He added that it “makes no sense” to ship products from China given that glass, readily manufactured by British firms, accounts for most of the panels’ weight.